The European Context of TAO

Analysis of the social and educational context of the project objectives

It is not breaking news that the European population is growing older and therefore, the society is facing different challenges already now and in the upcoming years. To these challenges belong physical and mental health of older people as well as the active participation of them in social life and society in general. One of the keys to keep active and be able to participate is continuing education also in later life in accordance to the concept of lifelong learning. The ET 2020 target is to reach a share of 15% of all adults between 25 and 64 to participate in education and training. With an average of 10,8% in the European Union in 2016 (DE: 8,5%; PL: 3,7%; UK: 14,4%) we are still far from that target. (Source: Education and Training Monitor 2017, p. 72)

Having a closer look at the target group of the project (50+) within the partner countries it becomes obvious, that the participation in education and training decreases with age. In addition, the picture looks very uneven in the different partner countries. Whereas the participation in education and training within the age group 55-74 in the UK is nearly twice as high (7,6% in 2016) compared to the average in the EU (4,8% in 2016), Germany (2,4% in 2016) and Poland (0,8% in 2016) are significantly below the EU average. During the last years, the participation in formal and non-formal education within this age group slightly increased in Germany, while it decreased in the UK and in Poland it has stayed more or less on the same level for the past 10 years. It is also worth mentioning that in this age group women are more likely to continue learning compared to men (2016 – EU: 5,6% Females/ 4,0% Males; DE: 2,5% Females/ 2,3% Males; PL: 1,0% Females/ 0,6% Males; UK: 8,7% Females/ 6,3% Males). 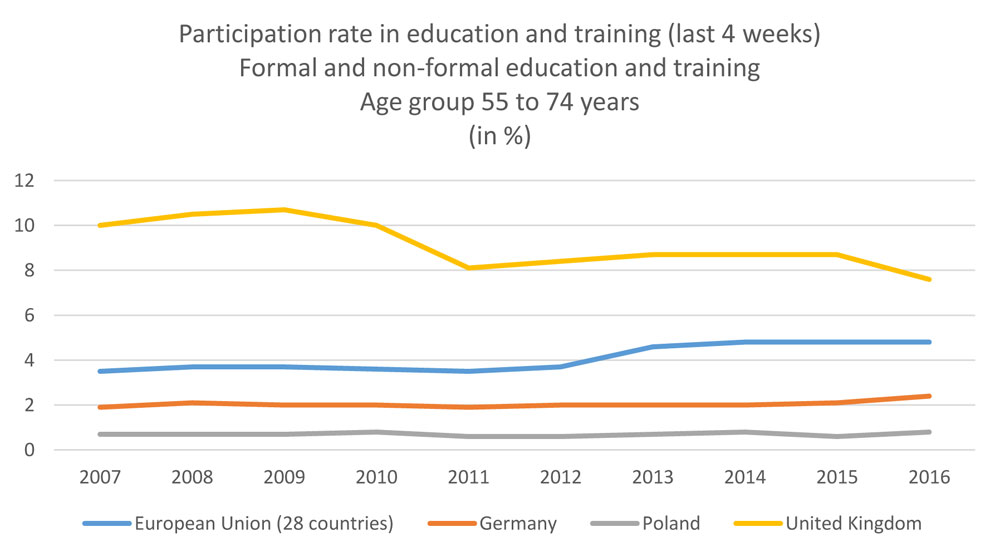 Nowadays, learning is often associated to new technologies – using computers, notebooks and smartphones connected to the internet. The internet offers a wide range of learning opportunities, which can be fee-based or even free of charge. New technologies are increasingly used even in conventional face-to-face courses. In addition, active participation in society takes more and more often place over the internet. As a result the knowledge of using a computer and the internet is becoming crucial and is also reflected in the increasing percentage of people who know how to handle these technologies. This is also true for the target group of people 50+. On the one hand, already in 2005 in Germany and the UK more than half of the individuals between 55 and 64 years and in Poland nearly a third of this age group had used a mouse to launch programs such as an internet browser or word processor (DE: 68%; PL: 27%; UK: 54%). In the age group of individuals between 65 and 74 years these numbers are a lot lower (DE: 35%; PL: 8%; UK: 33%). Data is mostly not available for people over 75. (Source: Eurostat – online data code: isoc_sk_cskl_i) On the other hand, the number of people 50+ who had never used a computer was still quite high in 2014. 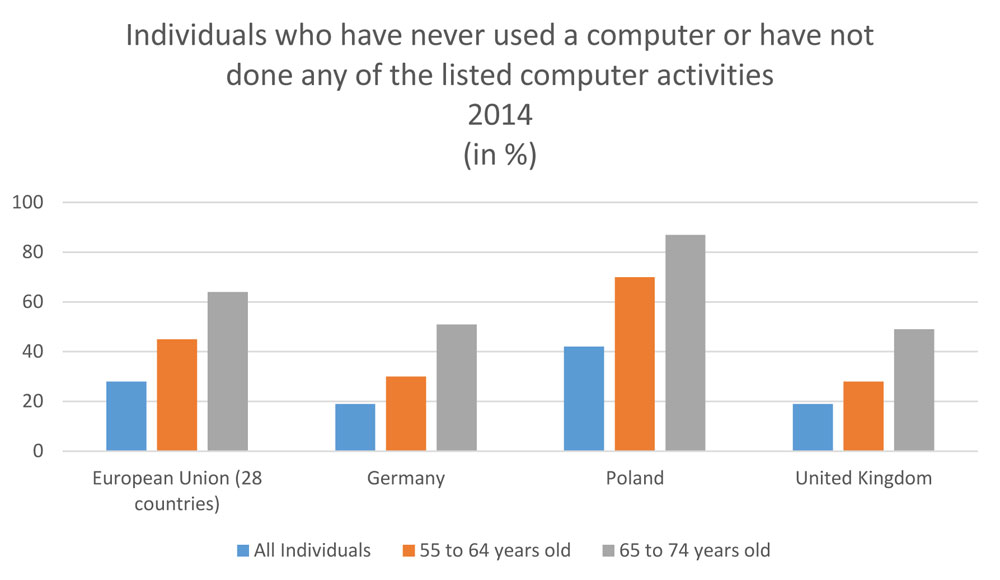 In comparison, the number of individuals in this age group who had never used the internet drastically decreased over the last decade (See: Eurostat – online data code: isoc_ci_ifp_iu) and also older people use the internet more frequently nowadays.

It is apparent, that in the age group of people 55-64, the use of computers and internet is much more common compared to the age group of people 65-74. One reason is that people between 55 and 64 are mostly still economically active and might need computer and internet skills for their work. So when this generation grows older, they already possess the knowledge and skills to use these technologies and will probably continue using them also for learning.

Following surveys in 2015 and 2016 the main internet activities for the age group 55-74 were: sending/ receiving e-mails (47% in 2015); finding information about goods and services (43% in 2015); playing/ downloading games, listening to music or watching videos (37% in 2016); reading online news sites/ newspapers/ news magazines (37% in 2015) and seeking health information (33% in 2015). Therefore, when informing oneself about what is going on in the world and looking for health information on the internet the target group gets involved in a form of learning. But also activities like internet banking (30% in 2015); travel and accommodation services (29% in 2015); consulting wikis (to obtain knowledge on any subject) (26% in 2015) and participating in social or professional networks (22% in 2015) seem to be common. Internet activities, which we would rather link to the terms education and training, like looking for information about education, training or course offers (13% in 2015); online learning material (4% in 2015); doing an online course (of any subject) (2% in 2015); communication with instructors or students using educational websites/ portals (2% in 2015) play a subordinate role. (See: Eurostat – online data code: isoc_ci_ac_i)

In conclusion, also older people get more used to using the internet to look for different kinds of information or to stay in contact with other people. Educators teaching people 50+ during traditional face-to-face courses can support this process by using the internet during their classes or giving their students research tasks, to mention only the simplest of possibilities.

What possibilities do elderly people have in the partner countries to educate themselves? In the UK the most popular form of education for the elderly is the University of the Third Age (U3A). It is a UK-wide movement for people who are not working fulltime anymore and would like to pursue their interests or learn something new. The movement started over 30 years ago and today there are over 1.000 U3As all across the country with more than 400.000 members. The members teach and learn from each other covering any subject they are interested in – from art to computers. (See: https://www.u3a.org.uk/) Also in Poland the U3A movement started already in 1975 and today there are 98 groups in 49 cities, which compared to 409 cities in Poland with more than 20.000 inhabitants is not a lot. In Germany, the concept of the U3A is not very common. Different clubs and groups of seniors and for senior citizens do exist but without an umbrella network. Furthermore, Germany has a very well established system of adult education centers (German: Volkshochschulen), which also offer many courses especially for the elderly. In addition, most universities in Germany open their courses for seniors, which results in a share of 42% of guest students who are over 65 (See: Statistisches Bundesamt, Ältere Menschen in Deutschland und der EU, 2016; p. 75).

A significant part of education for older people focuses on using a computer/ notebook/ tablet and the internet. In all partner countries exists a wide range of computer courses tailored for the elderly. For Poland, the project “Lighthouse keepers of Digital Poland 2020” should be highlighted. Within this initiative volunteers can register on the platform as lighthouse keepers and offer computer courses. So far 38 519 courses with people 50+ took place. (See: https://latarnicy.pl/)

So how can you become an educator for adults or even more particular for people 50+ or seniors? This is again very different in each of the partner countries.

Formal qualification requirements for Further Education teachers were revoked in September 2013. However, the sector still recognises the need for good teaching qualifications – FE training providers are all independent organisations that recruit directly to their courses, so they may still specify particular requirements or eligibility criteria.

There are three training routes available to become an FE teacher, catering for people with and without teaching qualifications:

The word – educator – was introduced in Poland almost thirty years ago to broaden the concept of two other words – teacher and trainer, the former being associated with formal school education and the latter mainly with formal education of teachers. The rapid development of non-formal educational in Poland after 1990 and the emergence of a rich variety of both private and public educational institutions offering new models of learning has led to the concept of – educators – who can deal with the diversity of learning forms and aims. Educators were meant to be the trainers for new times, better informed about the How, What and Why of training in many fields and setting the standards of professional development. After the initial efforts to create a formal framework for the training of educators in the nineties, it became apparent that, although the qualification was formally recognized, training programs created and evaluated, the open educational market had its own internal regulations which accepted other related qualifications. In other words, there evolved a dual and coexisting model where the competences of educators are validated by their professional experience as well as formal courses.

In Poland, educators of adults are mainly postgraduates who come from different fields (education, psychology, school management etc.). All those who want to gain this qualification can either do post-graduate studies (e.g. in andragogy) or a preparatory course.

Educators of learners 50+ are mainly grouped around the Universities of Third Age. Apart from a couple of online manuals for educators available online, little is known about the professional training they receive.

Also in Germany, there are different ways to become an educator for adults. Many educators in this field have a non-pedagogical background and do not have any formal qualification in andragogy or didactics. They are usually experts in the field or subject they teach and educated themselves or learned from experience. Another way to get there are further education and training and extra occupational courses or studies. A wide range of universities also offer bachelor and master degrees in adult education/ andragogy. An overview of these offers can be found in the database of the German Institute for Adult Education Leibniz Centre for Lifelong Learning (DIE): https://www.diebonn.de/weiterbildung/studienfuehrer/default.aspx. The focus of the study programmes is very diverse. Emphasis is for example put on didactics/ methodology, cultural/ political education, intercultural education, vocational education, new technologies, etc. Usually there is no difference in the education of educators for adults in general and elderly adults. A few years ago the University of Education of Karlsruhe started offering a special master degree in education in later life/ geragogy.

This project has been funded with support from the European Commission. This publication reflects the views only of the author, and the Commission cannot be held responsible for any use which may be made of the information contained therein.